skip to main | skip to sidebar

Forward to the Past? 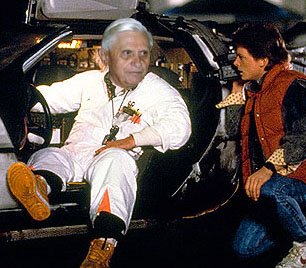 So suddenly we’re all familiar with the Byzantine emperor Manuel II Paleologos, thanks to the Pope, who quoted a particularly undiplomatic passage of a recorded dialog between the emperor and a Muslim scholar at the end of the 14th century. Manuel dismisses Islam by telling the scholar, “Show me just what Muhammad brought that was new, and there you will find things only evil and inhuman, such as his command to spread by the sword the faith he preached.” Manuel certainly had his reasons for objecting to the violent spread of Islam – notably, his empire was getting the tar whipped out of it by the Ottoman Empire after the failure of the latest crusade to spread Christianity by force.

What’s interesting is that the Pope’s speech doesn’t really have anything to do with jihad and violence so much as it deals with the compatibility of faith and reason. In this sense, it’s very much like a palm reader attacking those charlatans at the Psychic Friends Network for just making stuff up. Benedict wanted to make an abstract point and just chose a quote that he figured wouldn’t bother anybody in the room. Someone should tell him that with the internets (brought to you by reason) nobody’s ever just preaching to the choir anymore.

Granted, Manuel’s quotation is inflammatory, though the outraged reaction of some in Islam is equally ridiculous. Even more ridiculous, though, is the Pope’s central point, which has become lost in the subsequent brouhaha. For the Pope concludes that science is rightly subservient to faith: “Modern scientific reason quite simply has to accept the rational structure of matter and the correspondence between our spirit and the prevailing rational structures of nature as a given, on which its methodology has to be based.” (emphasis mine). While such a statement might be warmly embraced by the Kansas school board, any scientist can tell you that religious revelations have only hindered the pursuit of empirical knowledge.

Religion deals with humans’ relation to God. Science deals with empirical, testable reality. While 4,000 years of Judeo-Christian inquiry has brought us such wonders as the Kabbalah, snake handling and the strappado, modern religion seems no closer to enlightened understanding than its ancient forbears. Science, however, has in its meager four centuries seen 13.5 billion years into the past, split the atom and fed billions who would otherwise be starving. Of course science doesn’t have all the answers – acting ethically is still a mystery to most humans, for instance (although a rational, non-religious approach to ethics could likely help). But for science to subvert itself to religion, as the Pope insists, is to hitch its wagon to an anvil. Muslims might be outraged by one quotation in Benedict’s speech – but the scientific and rationalist community should be pointing out the idiocy of the whole damn thing.
Posted by Mike Di Leo at 11:07 PM

Congrats on the C&L link. A well-written, well-researched post. I don't know how the Catholic Church as governed from Rome can continue to perceive itself as relevant given the facts you state. It's amazing.

Thanks again, keep the faith, and keep blogging.

Marshall Brain of HowStuffWorks has a side project dealing with the issue of the place of God and Religion in the modern world that you may find of interest.

Here's a few sample links to get you started.

Blue Gal, thanks for the encouragement. I've seen a couple of reports that the Vatican leaders are having a retreat and one of the things they're considering is the church's stance on evolution, so I hope they're not considering Intelligent Design as an alternative to the scientific viewpoint.

NYC Alberts, thanks for the links. Many fundamentalists still insist that God's existence is a proven fact -- as long as you have faith first. We've got a long way to go.

Well said. It's interesting to me that there is so little comment in the MSM about the Catholic churches lurch to the right. It seems like a long time ago that the US Council of Bishops took on the Reagan administration over issues like the arms race and immoral foreign policies in Central America. Now comes the attack on science. How, exactly did Godspell and Jesus Christ Superstar bequeath us the Moral Majority and the Christian Coalition? When did Pat Buchanan become Czar of the US Catholic Church? Did I miss something?

Anyone who thinks that matter has a rational structure has evidently failed to get to grips with quantum physics.